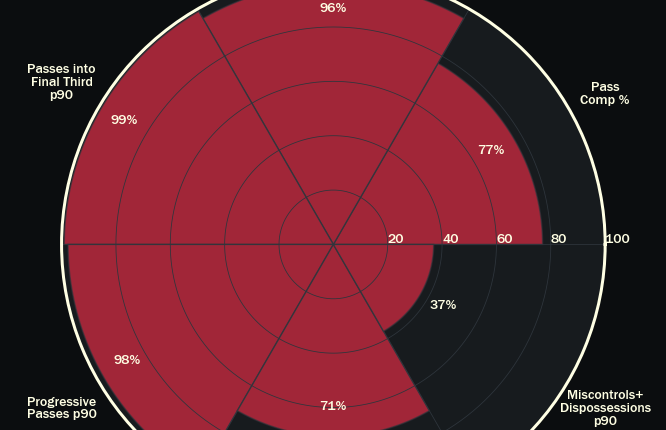 View the source code for this project on GitHub

I find the hardest part of analyzing the performance of non-forwards in football is finding a starting point. With forwards, it is easy to look at goals and assists, or expected goals and assists (xG/npxG and xA), but those are not effective gauges of the quality of, say, midfielders.

I wanted to find a way to quickly see and provide the basic performance of a midfielder to others without having to worry about explaining if particular values are impressive. Having seen polar axis charts on Matplotlib’s website before, I thought of the idea of video game-style charts like these from StatsBomb, except with percentile rankings, so even people who aren’t familiar with football statistics can easily understand:

First, I scraped FBRef.com’s database of players in Europe’s Top 5 Leagues, edited them in Excel, and loaded them into Python’s Pandas using pd.read_excel().

Then, in Pandas, I created two filters that determined the eligibility of players to be included in my percentile rankings:

From there, I used pd.rank(pct=True) to create percentile rankings for every player remaining in each of the categories I wanted. In the case of looking at midfielders in terms of effectiveness in possession and ball transition, I opted for the following:

I created the chart to match the template of a scatter plot style I had settled upon in Matplotlib a few days ago:

Lastly, I wanted to make these quick and easy to generate, so I customized it in such a way that I could simply type the player name at the top of the Jupyter Notebook cell and the chart would generate in seconds.

The final product, shown below, is a clear articulation of the possession profile of 504 different midfielders in Europe’s Top 5 Leagues.