Python Data Visualization and Video Article: Why Manchester United should not allow Sergio Reguilon to join Spurs so easily 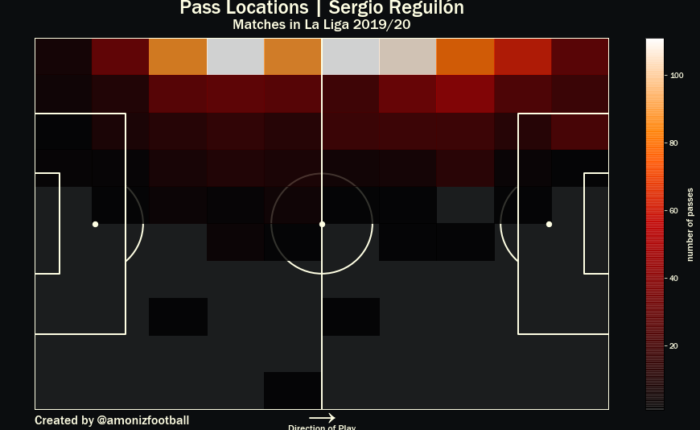 The following thread was the result of hours of watching Spanish left-back Sergio Reguilon play for Sevilla and comparing him to Manchester United’s equivalent players. The thread reached an audience of over 32,000 people on Twitter.

I learned to map passes, 2d-histograms, and action events in Python’s Matplotlib, but unfortunately, by time I completed the thread, Reguilon agreed a deal to join Tottenham Hotspur.

You can read the original thread on Twitter or view my source code on GitHub.

Reguilon caught enough of an eye to be named La Liga’s best left-back last season, playing as an attacking fullback in Sevilla’s 4-3-3, and occasionally at left wingback in a 3-4-3.

He’d play in similar positions at United, whether in Solskjaer’s 4-2-3-1 or the 3-5-2 he uses to stifle certain opposition and play on the counter.

Luke Shaw is a much better player than he ever seems to be given credit for, but his fitness problems leave United with only Brandon Williams, whose weak-footedness makes him a liability in transition and attack and likely also makes him more suited to right-back.

Statistically, Reguilon is a much more aggressive defender than Shaw and Williams and has far more defensive actions per 90. Many would argue this is due to playing in a more aggressive role, but pretty much everything suggests otherwise.

This comes with its advantages and disadvantages. The player’s proactiveness leads to some eye-catching ball recoveries that create wonderful opportunities for his side to counter. Moments like the one below would only improve United’s counter-attacking prowess:

Moments like those don’t always pay off, though, and can lead to chances for the opposition. In particular, Reguilon’s excessive aggression often manifests as impatience- he commits double the amount of fouls as both Williams and Shaw, some of them in dangerous areas:

Shaw’s defensive weakness tends to be powerful and skillful wingers who pick up the ball 10 yards in front of him, as we saw against Steven Bergwijn after the restart and Adama Traore on multiple occasions.

If Reguilon can tone down on the fouls, he’d be an upgrade on Shaw against these types of players. Blessed with tremendous pace, Reguilon struggles a bit more with strength- large and strong wingers that like to get into the box like, for example, West Ham’s Andriy Yarmolenko.

As I have highlighted many times, United need upgrades in ball progression to compete with Europe’s best. Solskjaer’s side tend to struggle to work the ball into midfield, especially when Shaw is out injured.

Shaw is heavily involved in United’s buildup play because his impressive and accurate passing provides a safe and simple transition into midfield. Reguilon is more progressive despite receiving the ball less. However, he incurs more turnovers per 90 by quite some distance:

There is a lot to suggest this is due to his role as a high-risk ball progressor at Sevilla. For one, both he and partner Navas had much better turnover stats at their previous clubs. Reguilon frequently shows passing ability and range combined with positive decision-making:

The Sevilla left-back is a much more ambitious dribbler than both Shaw and Williams, completing more take ons than both combined, with higher success, and in less than double the minutes:

In terms of passing, Reguilon actually completes a higher proportion of his passes from deeper areas than Shaw and Williams, suggesting that, reducing his turnovers, he would be able to play the same buildup role as Shaw, if not with even higher effectiveness:

Pass maps against the notorious Getafe and relegated Espanyol depict Reguilon’s variety in long and short range passing, as well as his ability to modify based on the opponent:

Reguilon’s ability to make quick and penetrative runs towards the box from out wide leads to scoring opportunities for himself and those around him, as shown by this goal against Roma in the Europa League:

His delivery perhaps isn’t at the level of Liverpool’s borderline-generational fullback duo, but his technique and ability to choose the right type of cross leads to great chances for his side.

He most notably likes low, driven crosses across goal, which would require better runs from United’s forwards into the box, but would certainly suit them better than the high, floated deliveries that Ibrahimovic would’ve preferred.

Perhaps most importantly, though, is his undying determination to provide width. Reguilon often makes lung-bursting runs into wide areas even if only to create space and options for his teammates.

These runs are what allow Sevilla left-winger Lucas Ocampos to get into the box, as would be the case with Marcus Rashford. United sorely lack width on both wings, but having Reguilon and Sancho would almost immediately solve that issue on both sides.

Reguilon is a more aggressive defender who deals with pace better than Shaw, but commits many fouls. He’s a more progressive player in buildup but may be prone to giving the ball away. His attacking output, aggression, and width is unmatched among United fullbacks.

His signing would allow Brandon Williams to play on the right in both a 4-2-3-1 and 3-5-2, especially when Shaw inevitably gets injured. I understand why United would not want a buyback clause, but they also reportedly won’t offer €30 million, which is simply ridiculous.

There won’t be another fullback of Reguilon’s ability and potential available for a comparable price.