Data Visualization- How good are Manchester United’s defenders and holding midfielders at progressive passing and carrying? 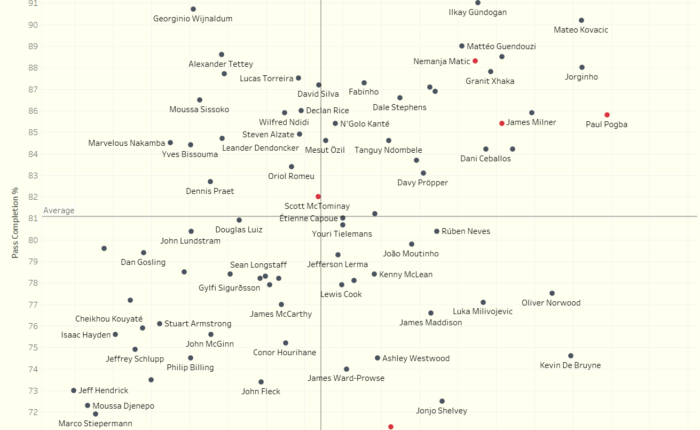 As part of my most recent data analytics project, I learned to map coordinate data and construct arrows in Tableau to create player pass maps. I used my progress to create a thread on Manchester United’s possession football after seeing slight weaknesses in their game in a 1-0 win over FC Copenhagen in the Europa League quarterfinal.

The results were published in the Twitter thread below:

Recently, United have struggled to transition the ball from defence to midfield, and while last night against Copenhagen was an improvement, the problems were still present.

I think a lot of the team’s success is dependent on getting the ball to Paul Pogba and Bruno Fernandes in advanced areas, as I wrote for Stretty News last night:

Pogba is exceptional in transition. Yes, he takes risks and loses the ball sometimes, but the fact he even completes as many passes as he does given his progressiveness in possession is unbelievable:

If you had Pogba dropping between the centre-backs to receive the ball, United would transition much more smoothly. At this stage in his career, though, Solskjaer wants him in the final third.

In terms of pass completion compared to progression, Pogba is one of the best midfielders in England- the only comparable players are Rodri, Mateo Kovacic and Jorginho:

Nemanja Matic and Fred also perform well here, suggesting Pogba isn’t the only United midfielder who can transition the ball. Looking at progressive carrying and passing distance per 90, both rank amongst the top 10 midfielders:

Matic has made a career out of this, but Fred is more surprising given his tendency to give the ball away in dangerous areas. His pass map against Copenhagen illustrates how effective he can be:

Even though Fred has solid passing, he hasn’t played as the deepest midfielder much, and he was substituted for Matic against Copenhagen. My guess is that his defensive tendencies make him more suited to playing as a deep no.8.

This means that Matic either plays through the exhaustion he obviously faces, or Scott McTominay comes in. In terms of progressive carrying, passing, and even pass completion, this is a huge dropoff:

The situation is very much the same as in defence. Shaw, Maguire and Lindelof are United’s main ball-playing defenders, and while they aren’t amongst the top players in the league, they are distinctly above average:

The sample sizes for Bailly, Fosu-Mensah Dalot, and Tuanzebe are small here, but I included them nonetheless as an indicator of how they compare to the rest of the squad:

This probably explains why Shaw started every game post-restart until his injury against Southampton. Dalot is the only other fullback that offers comparable ball progression, and he primarily plays at right-back, where he won’t replace the undroppable Wan-Bissaka.

There are also a lot of questions to ask about the first team players- as good as they are on the ball, there are no standouts compared to Kovacic and Jorginho at Chelsea, Van Dijk and Liverpool’s fullbacks, and pretty much everybody at City.

The answers will likely lie in at least one of the three following solutions:

1. Improving Players- Most importantly here are Wan-Bissaka and Williams. Wan-Bissaka lies about 10% and 5% lower in terms of progressive passing and pass accuracy than United’s other starters. He’s improved in the final third and I think he can improve here.

As for Williams, many suggest that a good portion of his struggles come from being wrong-footed at left-back. Perhaps he needs to work on his left foot or play at right-back.

This aspect of Smalling’s game suggests he shouldn’t return from loan. Let him enjoy himself playing his best football in Italy.

It’s up to Solskjaer to decide the futures of Fosu-Mensah, Dalot and Tuanzebe and whether they can work on their respective weaknesses. Tactically, Tuanzebe in particular seems a great fit, but he needs to stay fit to develop.

2. Signings/Academy Promotions- United need to sign one spectacular ball progressor who walks into the Starting XI at either centre-back, left-back, or holding midfielder. There’s arguments to be made for all 3 positions.

Holding midfield seems to have the best options in the market, and Matic is probably the most replaceable player in United’s first XI given his fitness struggles. I think a younger, more mobile, better passer than Matic would be transformative.

Tactically, a left-footed centre-back makes a lot of sense. I could probably conduct professional research and write a paper as to why, but Bleacher Report journalist Sam Tighe explains it in this article from 2014:

Finally, I think a left-back is a longshot this summer as Williams will continue to cover for Shaw, but a more progressive alternative would allow Williams to develop more on the other flank, if that really is where his future lies.

It’s fun to joke about Tahith Chong’s 20-minute cameo at left-back, but the experiment makes sense with this in mind. I wouldn’t be opposed to seeing him there out on loan or early in the cups next season.

Other academy players also come to mind- Ethan Laird, Teden Mengi, James Garner and Dylan Levitt. I won’t claim to be an expert on any of them but I’d be surprised to see them jump straight into United’s first team without a loan next season.

3. Tactical Variations- Thierry Henry on Pep Guardiola: “He puts everything in place to get the ball up to the final third of the pitch and then trusts his team to finish the job in the only area of the field that can’t be planned for.”

I want to avoid the lazy analysis of Solskjaer that often props up when United aren’t playing well, but I’d be lying if I said United operate with as clear of a vision and plan in their own third as City.

Experimenting with different combinations of play to get United into midfield could be the key to unlocking another level from the first-team players who already look quite comfortable on the ball.