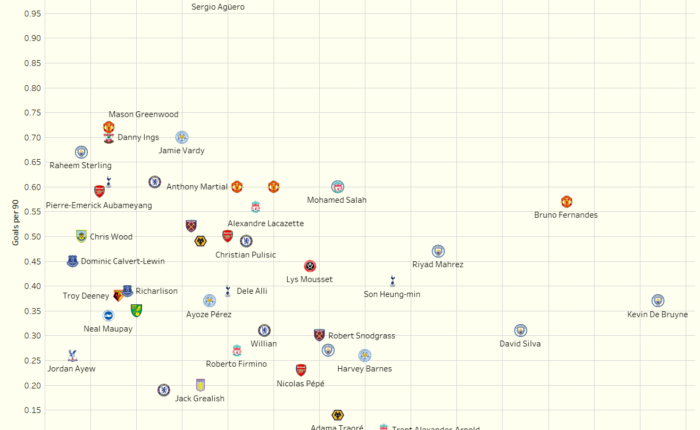 I am attempting to learn data science through my favourite sport, football, as an attempt to both understand the game at a deeper level and enhance my interest in data.

The following thread, originally posted on Twitter and Reddit, incorporates data analysis and visualization in Excel and Tableau by searching FBRef.com’s massive football databases for information about Jack Grealish of Aston Villa and why Manchester United might be targeting him in the next transfer window. Enjoy!

We have seen United’s overreliance on Fernandes and Paul Pogba in the FA Cup this season, where Fernandes was forced to play against the likes of Norwich and Chelsea, and yet the side struggled in Pogba’s absence.

Being forced to play both Pogba and Fernandes every match is a recipe for disaster for the fitness and form of both, which explains links to attacking midfielder Jack Grealish of Aston Villa:

Grealish shares positional similarities and goal-burdening importance with Fernandes, but would add a different dimension to United’s style with his low-risk creativity and ball-carrying prowess.

He adds squad depth and variety to United’s 4-2-3-1 formation, where he would most likely fill in for either Fernandes in attacking midfield, or Rashford on the left flank:

We’ll start by taking a look at direct contributions to goals. Fernandes has either scored or assisted 50% of United’s PL goals since arriving, with Grealish at an impressive 32.5% of Villa’s this season.

Of all players with 10+ contributions, Fernandes is the second-most productive player in the league per 90 behind only Sergio Aguero, a number that surely he won’t even sustain over his United career:

As such, Grealish appears weaker than Fernandes in terms of contribution, but this doesn’t take into account the amount of opportunities they have. We can adjust for that by comparing it to touches in the final ⅓:

Grealish is still behind Fernandes. Other arguments as to why this is could include:

I could write a full article on each of these individual points, but that’s not the focus here. Instead, I factored all into one graph using non-penalty xG and xA instead of actual goals and assists. Now, Grealish and Fernandes are really close:

One could argue Fernandes will continue to outperform Grealish even if he regresses towards his npxG, but it’s irrelevant- my only points are that nobody would be likely to maintain the numbers Fernandes has right now, and Grealish may yet improve his at United.

Nonetheless, both are among the Top 15 non-forwards in this regard. Here’s the same graph from above but without everyone FBRef lists as an exclusive forward:

Next, we look at chance-creation influence. We have seen that United’s midfielders outside Fernandes and Pogba struggle with ball progression into dangerous areas.

To start, here’s a percentile ranking of Grealish and United midfielders compared to the rest of the league for passes into the final 1/3, opposing box, and shot-creating actions, which credit two players for creating each shot a side takes:

Pogba and Fernandes are league leaders in every category, no surprises, but we also see that Grealish is right up there with them- except for passes into the final ⅓, for which he’s the lowest. This is probably because he often plays at left-wing.

There’s a valid argument that he’s not a proven elite player in terms of moving the ball to the final third, which is important for Fernandes and Pogba, but it would be absolutely wrong to suggest he’s not a good ball progressor.

Grealish is actually one of the best dribblers in the league, and even though he scores pretty average in terms of progressive passing distance per 90, he makes up for it in terms of dribbling distance:

We can see his dribbling is in another bracket from the region of the graph with United’s midfielders (except Lingard). This graph begins to illustrate Grealish’s more unique attributes:

Fernandes is a relentlessly creative player who will only complete between ⅔ and ¾ of his passes, but also create genuinely great chances for his side to score. With Grealish, however, it is his ability not only to create chances with his dribbling and foul-drawing in particular, but also to do so in a relatively low-risk manner.

Teams like Villa tend to have fewer chances to break forward over the course of a match, meaning they can’t always afford the luxury of a Fernandes or de Bruyne, who will create a goal every game but also lose the ball countless times.

Grealish’s ability to retain possession with 80% of his passes while also creating more than 5 shots per 90 make him an unrivalled low-risk creator among everyone outside the Manchester City passing machine:

Grealish has carried the ball further than any player in Europe this season (ahead of Messi in 2nd), and mostly progressive yards too. This percentile chart shows that he’s also the most fouled player in the Premier League:

None of United’s midfielders even come close to Grealish across these categories. His ability to hold the ball and draw fouls gives Villa relief, and he does it while also creating crucial goals.

He would immediately help United see out games in all three phases, as they failed to do against Southampton.

In that game, he replaces Fernandes or Pogba and helps frustrate Southampton, forcing fouls high up the pitch to reduce pressure. Fernandes and Pogba were instead replaced by Fred and McTominay, which killed the side’s attacking threat.

On the other hand, Grealish isn’t perfect. As previously alluded to, he lacks experience navigating the deeper thirds. In fact, Villa play a 4-3-3 with more combative midfielders, forcing him out wide:

As a result, Grealish (predictably) records fewer touches on the ball in the defensive third and middle third than all four of United’s deeper midfielders:

This isn’t an issue if he plays in Fernandes’ role, but it could prevent him from playing alongside Bruno in midfield. Maybe he could adapt and become a ball-carrying player and safe passer from deep, but it’s far from proven.

Grealish can play out wide, which most midfielders cannot, but those other midfielders might also be able to play deep, which could be important to Solskjaer. It’s difficult to find a player of Grealish’s calibre and age who can do both.

However, United paid over £50 million for Fred, who has looked great at times this season- why not use him in bigger games and try Grealish in smaller ones where Pogba is absent?

Unfortunately, the stats suggest he probably can’t start in central midfield alongside Fernandes in the big games. United should also be pursuing a deep-lying playmaker this summer, but if they want only one midfield signing for multiple roles, Grealish isn’t that.

He won’t start ahead of Fernandes or Rashford, and he isn’t the sole, miraculous solution to United’s squad depth, so it would be ridiculous for Villa to charge more than the initial £46.5 million fee United paid for Bruno in January, especially during COVID-19.

It’s time for Grealish to take the next step, and I think he’d be a great signing. He offers a lot to United that isn’t currently there, and adds crucial squad depth.

Thanks for reading! Appreciate RTs, likes, opinions and feedback 🙂