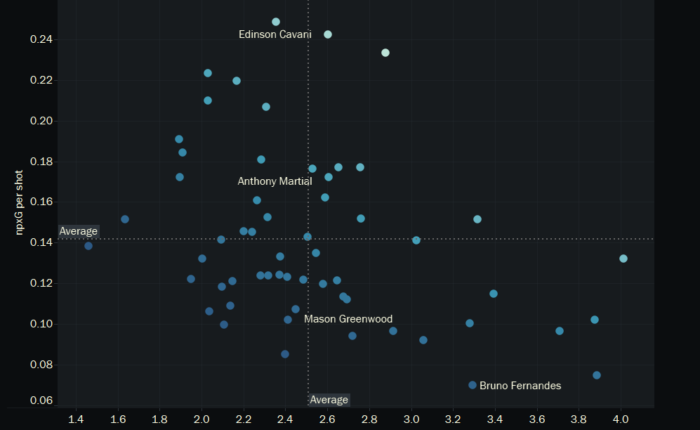 The timing of the tweet looked really bad 40 minutes later, when Greenwood headed home to win the match for the Red Devils. It then looked even worse when he assisted United’s winner and scored one for himself in Sunday’s 3-1 win over Spurs. However, I’m not one to dismiss a season-long concern after a week’s sample size of results.

Truthfully, I wasn’t even expecting such a mixed response to a tweet expressing skepticism towards a Manchester United forward with one goal in twenty-three Premier League appearances this season. Skepticism would be a mild word to describe wider perceptions of Anthony Martial, who has just 4 league goals in 2020/21. Martial has been a United player for nearly six years now and turns 26 in December, and he’s still miles away from the player I believed he would become when I watched him take the Premier League by storm in his debut campaign.

Reflecting upon Martial’s time at United and comparing to Greenwood’s recent rise, there are striking similarities that could be cause for concern; most notably, an overreliance on finishing prowess in the face of limited opportunities at goal, and an insufficient creative output to compensate during goal droughts.

Greenwood’s rise to United’s first team in 2019/20 began with playing minutes and scoring seven goals in the early stages of the cup competitions. The opposition against which he scored were underwhelming- Rochdale in the EFL Cup, a penalty against Tranmere Rovers in the FA Cup, and goals against Astana, Partizan, a brace against AZ Alkmaar, and LASK in the Europa League. While the list doesn’t read as particularly impressive, the nature of the opposition allowed the teenager to adjust to his senior surroundings, as he intermittently played an increasingly prominent role in United’s Premier League form given alternating injuries to Marcus Rashford and Anthony Martial.

The forward left for the three-month COVID-19 hiatus with an impressive 12 goals in all competitions, and returned from lockdown having visibly grown in stature. He also returned with a bang, stringing together a run of 5 goals in 8 consecutive Premier League starts to help United qualify for the Champions League on the final day of the season.

The most impressive aspect of Greenwood’s double figure debut domestic league campaign was his extremely clinical finishing. From smashed strikes into the top corner to cool placements at the near post after a series of stepovers, the player showcased a varied finishing portfolio that led many- manager Ole Gunnar Solskjaer included- to laud his ability to place the ball in the back of the net. Asked once in an interview whether Rashford or Martial was the better finisher, Solskjaer said, “Natural finisher? Well, they’ve still got a way to go, because Mason’s more of a natural finisher than those two.”

During his post-lockdown scoring run, Greenwood also alluded to some of the near-complete two-footedness that he showed in United’s youth setup, most notably in their 5-2 rout over Bournemouth, in which he scored strikingly similar goals with both feet:

Greenwood’s ridiculous finishing streak to end the season resulted in 10 Premier League goals from just 3.39 expected goals (xG), an unprecedented extent of overperformance [Understat]. The problem that naturally arose from this, however, is that this level of finishing was simply never going to be replicable over his playing career. Even considering the two-footedness and wonderful shot placement and technique, attributes we have seen in persistent overperformers of xG over the years, Greenwood would have to be the greatest overperformer ever by a sizeable margin to come anywhere near replicating the finishing he achieved in 19/20 over the course of his career.

At least some regression was inevitable even if not to the extent shown above, but the real problem is what remains in Greenwood’s goal-getting game without the finishing: a large supply of unfavourable shots. As shown above, he doesn’t generate anywhere near enough xG to be a long-term world class goalscorer. Understat has him at 0.28 non-penalty xG per 90 this season, which ranks him at 44th in the Premier League among players who have played 900+ minutes this season. In fairness, even that is a slight improvement upon last season, when he was 55th with 0.23.

The two vizzes below both demonstrate that, while Greenwood averages more shots than the typical Premier League player with over 0.20 npxG per 90, the average opportunity quality of his shots is consistently among the worst high-volume shooters in the Premier League. Even compared to United players, only Bruno Fernandes is taking lower-probability shots.

Greenwood’s career Premier League shot map also makes the same suggestion. Of his 13 goals this season, only two came from opportunities worth over 0.15 xG. Greenwood also only has one career shot in the six-yard box. The viz below shows that Martial and Rashford respectively average shot opportunities 6 and 5% better than Greenwood in his early career:

The 19-year-old is either deliberately, inadvertently, or instructed to be opportunistic about taking advantage of his finishing ability, but on top of that, he also doesn’t find himself in high-probability shot situations at all. Much like Martial, Greenwood’s affinity for the ball is unnatural for a striker and his desire to demand it to feet often costs him better chances at goal. To explain further, I compiled some clips from his performance against Granada, taking note of his movement in particular. This match is a great example of Greenwood’s tendencies because he played the first half up front and the second half out wide, and his ball-demanding tendencies were present from both positions.

Here, Greenwood is seen showing for the ball at Victor Lindelof’s feet. The ball ends up going over the top towards Marcus Rashford and we see at the end that Daniel James was also running in behind.

I noticed this first type of scenario at least half a dozen times, both when Greenwood played up front and out wide. While Rashford, James, and Bruno Fernandes are constantly searching for movements behind the opposition, Greenwood is more frequently looking to drop deep and receive. Even for United’s first goal, while Rashford makes a clear run in behind that Lindelof can spot and pick out, Greenwood is watching the ball the whole time:

You could perhaps argue that, in some scenarios, Greenwood is instructed to gravitate towards the ball while others make runs in behind. But the trend becomes much more problematic in situations where making runs is clearly beneficial, there’s nobody else making an easily-found run in behind, and there’s a clear run available to Greenwood, but he still remains static.

In this example, Fernandes slightly overhits a ball into space for James. It becomes clear to Rashford very quickly that the Welsh winger will look to play a first-time cross into the box if he reaches the ball, but Greenwood doesn’t make any run, leaving James with only one target to hit in the box:

Once again here, Cavani hits a long ball aiming for Fernandes on the right flank, and Greenwood has an opportunity to make a run beyond and receive the ball behind the defence with James and Cavani both making runs into the box. Instead, he slows his run and shows for a lateral pass that’s actually more difficult for Bruno to make:

Quite simply, Greenwood does not show the movement required to generate consistently good chances for himself. Moreover, changing to become a player who naturally moves like a striker can be very difficult for players, even with years of coaching and dedication. I’m not saying Greenwood definitively cannot do it, but until he begins to show consistent signs of searching for and executing dynamic runs to create chances for himself and others, he isn’t that player, and it’s not a safe bet to assume he will become that player.

But if Greenwood cannot be an elite scorer, the next logical question to ask would be- could he potentially be an elite creator? The short answer is… if he can, he’s not particularly showing signs of it yet.

While he produces the occasional moment of brilliance, like his assist for Cavani’s winner on Sunday, Greenwood’s progressive and creative output does not shine overall. Both Rashford and Martial (who usually plays up front and receives the ball much less) create many more shots and progress the ball in much higher volume than him. He scores highest in ball retention, which points to the idea that he’s quite safe in possession, preferring to retain the ball instead of trying a more creative pass or cross that might lead to an attempt at goal.

Greenwood often shows that his incredible ball striking in front of goal can translate to his passing and crossing, but he does not attempt creative actions in high enough volume. And similar to fashioning chances for oneself, transitioning from a low to high volume of creativity can be a very difficult area of one’s game to adapt, even with license to give the ball away more.

So right now, Greenwood isn’t a high-volume goal scorer, he isn’t a high-volume creator, and he is showing significant barriers in his game that could prevent him from being either. We know he has a unique profile and ability in both areas, but the sum of those parts still equates to a player whose expected goal contributions are actually below the median for forwards in Europe’s Top 5 Leagues. And as we’ve explored here today, there aren’t many easy answers to the question, “How can we change that?”.

One answer I can provide for certain is that the similarities to Martial are clear as day. Martial overperformed xG to score 11 Premier League goals in his debut 2015/16 campaign at 19 years old. He was generating a meagre 0.25 npxG per 90, 51st in the league [Understat], while playing for a much less effective attacking outfit under Louis van Gaal. And creatively, Greenwood’s output doesn’t even stack up to that of young Martial, who had almost double the expected assists to show for his excellent campaign.

United wasted three crucial seasons of Martial’s development by sharing his time between the bench and a role in which he wouldn’t develop or use many of the attributes he would need to be Solskjaer’s favoured striker. Now in his second season up front, he has reached the first lengthy finishing slump of his career and alarm bells are sounding. A recent injury could mean that Martial, United’s main striker, now approaching his prime years, finishes the season with just 4 league goals.

Could better coaching, more minutes, and a sustained development plan into a specific role have made Martial into the world class player I believed he’d be when I watched his debut season? It’s impossible to say. But given murmurs of Solskjaer continuing as manager beyond next season, he and his coaching staff cannot afford to make the same mistakes with Greenwood that Mourinho made with Martial.

Greenwood is still the best performer at United in his age group, and he has half a decade to fix some of the flaws in his game. Like Martial, he’s a match-winner at his best, as he showed in his 18-minute cameo against Spurs, where he received the ball high and wide, kept his movements swift and devastatingly dangerous, and ultimately floored Sergio Reguilon before sealing United’s win at the death.

There’s also many areas of Greenwood’s game that can more-easily be improved, both in his play and facilitation, than his overall movement and volume creativity. Some examples that come to mind immediately include reducing opportunistic shots in his game and instead instructing him to scan for playmaking options, constantly trying to isolate him 1v1 with defenders around the box, and improving upon his defensive tracking if he continues to play out wide.

Greenwood might not write his name in the history books, but if that’s going to be the case, let it be because he doesn’t have what it takes and not because United mismanage yet another exciting talent.

Thanks for reading! You can find me on Twitter @amonizfootball.