Data Visualization: The Truth Behind Police Brutality and Race in the United States 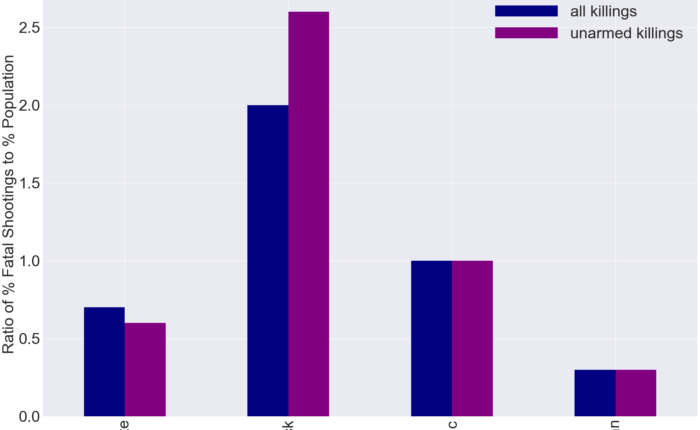 Ten days ago, George Floyd, an unarmed Black man, was murdered by Minneapolis police, igniting anti-racism protests around the world. The video, a disheartening nine-minutes of policeman Derek Chauvin kneeling on Floyd’s neck, was filmed in broad daylight, furthering widespread evidence that Black individuals are more subject to police brutality than their White counterparts, especially in the United States.

However, many were quick to jump to the defence of the American police force, citing various statistics related to police brutality towards white people in America. The tweets below provide an example:

“Anyone gonna talk about how police shoot and kill twice as many white people as black people, or does that ruin the whole “oh lawd we are being hunted!” narrative?”

The second is Fox News reporter Tucker Carlson, who says:

“In any given year police kill more white suspects, armed & unarmed, than black suspects… Yet no one on television will ever say that because that fact threatens the scams they’re working”.

I had to find the truth for myself, and, given the millions of opinions online at the moment, I knew I would have to do my own math.

The Washington Post has maintained the most detailed record of police shootings and killings in the US since 2015. Their database provides numerous details about each of the 5,360 incidents, most notably the date of the incident, the race of the victim, and whether they were armed.

Analyzing the data using Python’s NumPy, Pandas and Matplotlib libraries, I found that, while the statistics presented in the tweets above are not untrue, they vastly misrepresent the data.

Figures #1 and #2 below depict that US police kill almost double the amount of White individuals, and marginally more unarmed white people, than Black individuals each year.

(Note: Unarmed, in the context of this data, means the victim was not in the possession of any item that would even resemble a weapon- not even a toy gun, which was counted as a weapon in 178 of the killings)

However, this fails to account for a simple fact that belies the data: the vast majority of Americans are White.

To make sure this data was reflected over a consistent period of time, I plotted the killings by year, and found that the only significant change was a drop-off in the killing of White individuals in 2019, as seen in Navy Blue in Figure #4.

Misrepresenting this data not only does an injustice to a disproportionate amount of Black lives that have been lost, but also paints a factually incorrect image of America.

The data clearly and consistently suggests that, proportional to the population, more Black lives are claimed by US police than any other race.

Whether due to racism towards Black individuals among police and other Americans, or racial discrepancies in incomes (Pew Research Centre), which is correlated with higher crime, the United States of America is systemically failing its Black contingency. The fact of the matter is that both of these factors likely play a part, at least to some extent.

Before using poorly contextualized data or believing every statistic that you read online, make sure that your sources are reliable and that the data is compared with the sample size (in this case, population).

This incident indisputably demonstrates the imperativeness that we, as a society, work to reach a point where murder charges are made regardless of the race, income, or occupation of the suspect and victim. While not all police killings warrant charges, only 1% between 2013 and 2019 resulted in charges (CNBC).

The statistics back up the importance of the Black Lives Matter movement to achieve racial equality both in and outside the United States of America. In fact, given the gaping racial discrepancies that exist in America today, the fact that people even oppose the Black Lives Matter movement demonstrates exactly why recent protests are only the beginning of a long journey of education and reconciliation.

View the code for this project on GitHub